Recreational archery. A great sport that can be done naked. Just like just about any other sport. Just make sure you have the proper safety measures in place.

When in doubt, ask Sheila for advise! 😀

First off, I’m not a very fanatic sports person myself. I really love walking, hiking and cycling. I used to run but physical problems (read: back) made me stop.

Sports in the buff

Sports are great things to do without clothing. We all know that. Proof is for instance the many people who ride their bikes on the various WNBRs. 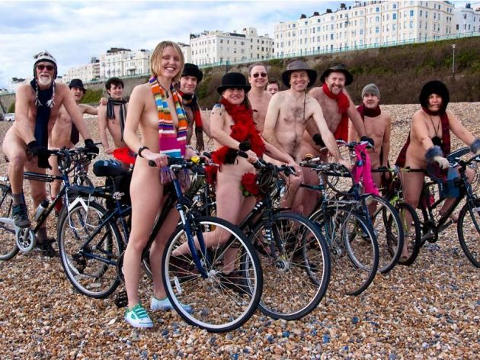 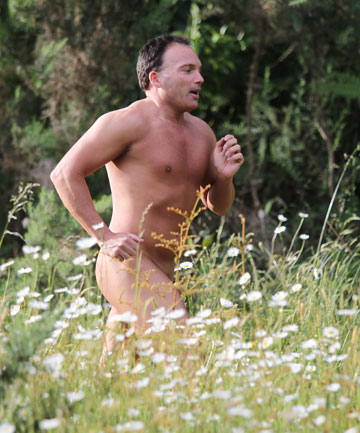 Jogging is something to do in the nude as well. Jogging, like walking or hiking, can be most enjoyed without clothing sticking to your skin when you’re getting warm, and I know that jogging can ‘turn up the heat’ inside you pretty quickly.

Simply walking along in a brisk pace can do that after a while also, so even when you’re not too warm at first, wouldn’t it be nice to take off those clothes once you’ve warmed up and go on in the nude? I’d definitely be in favour of that! 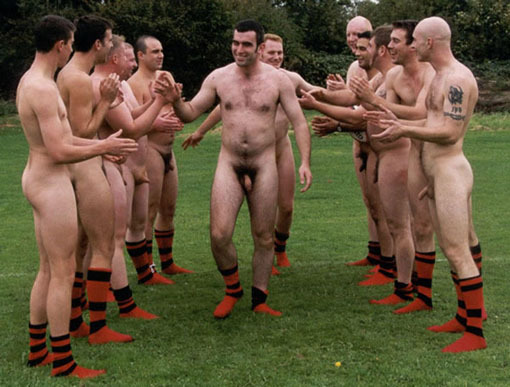 This surprised me. There are people who actually play rugby in the nude. And why not? If you’ve seen how dirty rugby players can get, doing it naked is a smart idea. It saves so much energy and money on not having to do the clothes, and they take a shower anyway. 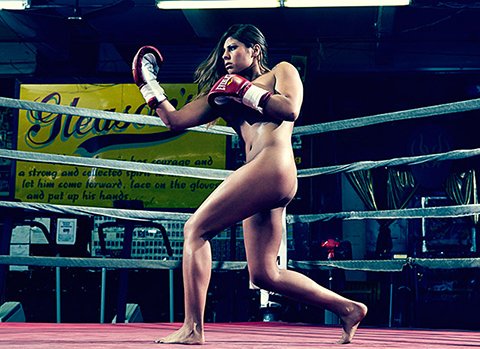 And then there’s… nude boxing. I admit I found the image and there was no mention of this actually happening or if the picture was staged. I dare think it’s the latter, but it’s also something that has naked potential. A layer of clothing isn’t going to stop a good punch to the body, and I’ve never seen a boxing match where the boxers wore full protective body armour.

And there is much more in the sports arena to be done naked. Skydiving for instance. I’ve seen images and reports of that. Or table tennis. Or swimming. Yep, it’s not just skinny dipping, serious swimming can be just as well done in the nude. Swim wear isn’t going to make that any better. 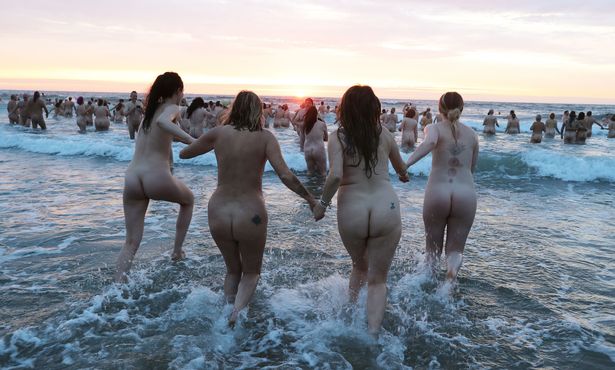 Have you done any nude sports, like yoga, in a gym, running, chess (is that a sport?) or something else that I forgot? I’d like to know about it. It would encourage more people to give it a try.

I thought that would get your attention. Yes, there is a disadvantage of nude exercising. You feel it the moment you go to the gym. No nude exercising there…

I have taken up doing naked morning exercises since a while. A month at least. Every morning I do a number of exercises which usually take 5 to 6 minutes.

They feel good, they make that I feel good through the day. Yes, only 5 minutes a day. But once a week I try to go to a proper gym where I want to work out for an hour or more. And that’s where the pain begins. Stuff on my body which at least 6 mornings a week isn’t there.

Not only is the stuff I  wear there quickly too warm and wet (which in turn makes it smelly), it’s also restrictive. Sports clothes up, down, left or right, they’re clothes, and clothes are by default limiting movement.

Doing exercises naked is much better and feels better. Nothing pulls and yanks, nothing hinders you in any way.

For that I’m glad I can do this mini-workout every morning. Naked. With nothing bugging me.

A naked gym in the area for those who want that. Wouldn’t that be nice?

Everyone does it once in a while, more or less fanatical. Sports. Whether it’s just a walk, running, cycling, volleyball or some other type of activity, there usually is something in it for you.

Many times I’ve heard and read that people, even ‘hard code nudists’, prefer to do their sports dressed when the activity level goes anything over a leisurely stroll or hike. As it’s mainly men who appear online in the nudist scene, I can only base my information on the male side of the nude sport spectrum. (Which is a shame, so please, ladies, step up.)

The problem: flopping parts. The gentlemen in question all were afraid that if they would do a sport that is more intensive than walking or swimming, their penis would flop all over and be a hinder to doing the actual sport.

To put the problem to the test, I went running for a mile. (Don’t worry, I do this more often.) And of course, I did this short run naked. I was curious about the flopping parts that were mentioned quite often, so I was determined to find out how bad this was.

After all, in many places it is written that the people in the original Greek Olympics participated in the nude, to honour the human body, and we have images to prove it:

So off I set myself, for a short run in the name of amateur science. The result: yes, there is some floppage, but not in a way that it would stop me from running naked. I am convinced that if I hadn’t occasionally looked down to actually see my penis flop, I wouldn’t have known that it did. Before someone says that running on a straight, flat road may do that: I ran a stretch of forest, with the trail going up and down, and lots of twists and turns in it. Maximum opportunity for sprained ankles, encounters with trees and floppy parts. I state that my parts did not flop in an upsetting way.

The gentlemen on the left in this picture also don’t seem to be bothered by anything flopping, and their activity level has far more opportunity for that.

It is indeed an older image; perhaps men in those days were still real men.

Luckily, once in a while, there are also ladies who are not inhibited by floppy parts, and trust me, gentlemen, even though I don’t have breasts, I can absolutely imagine that those hurt a heck of a lot more when they bounce than our parts will ever do. Nude Archery is appropriate as the USA men’s Olympic team won a Silver medal today. Here I am trying out for the women’s team. LOL  At least I’m wearing the correct uniform of ancient Greek Olympics.

I always appreciate it when you reblog my posts, it helps encourage more people to try topless and nude sunbathing or just to spend more fun time naked. So Thank you very much for every reblog.

Visit my resort blog at http://terracottainnblog.com

Ask to be a follower of mine, I always approve everyone.  MC