Who is up for some music?

Any nude musicians out there?

Last week I was listening to the latest Naturist Living Show podcast. (The link will take you to the right episode. If you read this ‘in the future’ the current latest will be a different one. 😉 ) This episode is about Nude Music.

I love music. I am not sure if I could be happy without it, so this was a very interesting episode.

In this episode, there was a long interview with The Soap Girls. Two French sisters who live in South Africa. Their music is an intriguing mix of stuff, with a lot of punk mixed in.

They have a lot of powerful statements about nudity, body positivity and more. Instead of transcribing the entire interview, I suggest you give it a listen.

You can find the Soap Girls’ Youtube channel here.

Something simple, it seems. Everyone knows what music is. Nude people also tend to like music. What I wondered about suddenly was: are there nude musicians out there?

It took a long time to find something in this area.

This was an era where some bands, mostly obscure ones, would perform in the nude. Mostly to shock and be rebels, I’m sure. It’s very hard to find imagery about those bands. Perhaps they looked something like this: 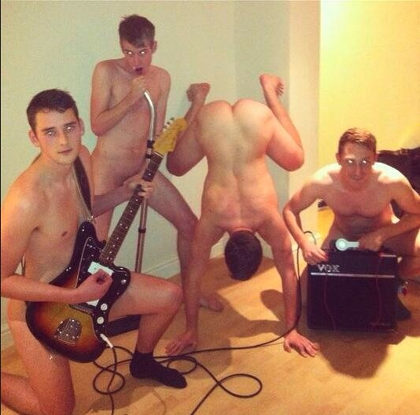 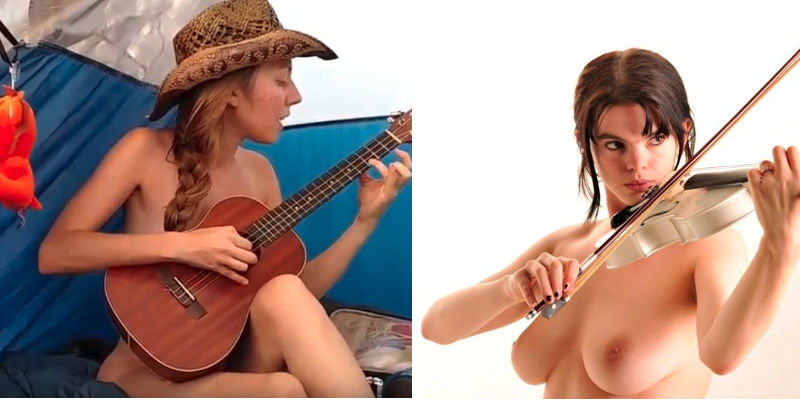 Most of the performers I could find were women. This is remarkable in a way, because in naturism and nudism men seem to prevail. Why not then, I wonder, in music?

Is showing the nude musician’s body outside naturism more of a gimmick to attract people than to celebrate the body? I think it is.

That’s a given these days, and it works since several decades. That is also, for me, one of the reasons that nudity (be it explicit or implied) is now so connected to sex. Advertisement had made that happen. Lots of people are happily brainwashed into that way of thinking daily. 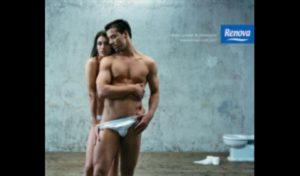 That clearly is the whole point. Also in music this seems to happen. Look at Miley Cyrus who has caused more than just a bit of controversy about her naked performances and appearing nude in music videos.

I really wonder if we’ll ever see a movement of real people, real music-makers, who are going to perform in the nude just because it’s the best way to be. Maybe you’ve ever been to a nude beach or resort where you’ve seen a naked band perform.

I’d like to hear about it. What was the band like? Where they nudists to start with, or did they strip because of the venue? 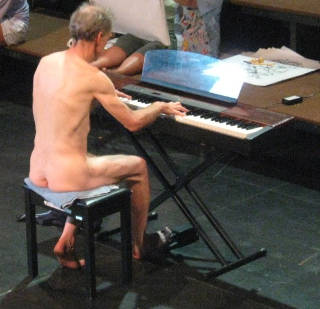 Yes, you saw that. I like classical music. Not solely that but it’s amazing for me. And the good thing is that there are people who perform classical music in the nude. Alas, they don’t play in most theatres  but if you look around there are examples to be found.

For instance there is this: an aria from “Tales of Hoffman” by Jacques Offenbach. This is definitely a complex song to sing and this lady, Abigail Wright, who is a mezzo soprano, took on this song and performed it naked. That’s having guts.

France has nude performers as well.

This should not be surprising. France has a large amount of naturist places and they’re quite popular. A performance by the Bordeaux National Opera in the nude is therefore not something you should be surprised of. They performed Les Indes galantes, an opera-ballet by Jean-Philippe Rameau. Here is a sample of it:

Not only in the western world.

Japan is known for being eccentric at times. Luckily they also cater to the naturist taste at times. For you: The Japanese Naked Orchestra, with The Nutcracker of Pyotr Iljitsch Tchaikovsky.

Do you know of other nude performers of classical music or performing arts? I know there are plenty of experimental modern performers. It’s the classical ones I am looking for. They break borders…