Is there a difference? I know that in most of the US of A the words are used interchangeably.

I also know that in Europe, for instance, the two words are used differently. Naturism appeared after nudism. I’ve been thinking about those two words recently.

Thoughts on the difference. 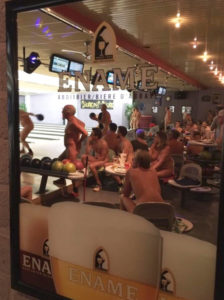 Nudism. The word has ‘nude’ as its base. Being nude. Like the people in the image on the right, playing bowling, having a clothes free, good time. Great for them, and if you’d ask me I’d join them in an instant. For one it’s a great way to be socially nude, and for another it would be nice to practice bowling again. (I truly suck at it.)

Naturism. The word has ‘nature’ at its base. Being with/part of nature, like the people 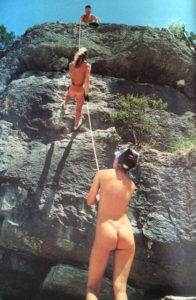 on the left. Naked in nature, being part of it and experiencing it that way. Exposing themselves to the real, rough world in their own vulnerability. It’s a way to get things into perspective.

An average human, in clothing (be it protective or not), will consider himself or herself master of the world, maybe because we’ve conquered just about everything. How untrue such a statement is when you’re naked and perhaps even afraid!

We’ve not conquered things. We’re adjusting them – and often with disastrous results, like the acid rain the world faced and still faces, climate change, and earthquakes that happen because we empty the earth below us from fossil fuels.

Can you be a nudist and a naturist?

I think that’s perfectly possible. Being naked in and around your house, whenever that’s possible, makes you a nudist (in my view at least). Enjoying the outside in the nude, being close to and having respect for nature (one of the pillars of naturism according to the INF) makes you a naturist.

More and more I feel like dropping all those words and labels. Be who you really are. Be naked and nude and a nudist and a naturist and clothes-free. As long as you feel good about it and you don’t intend to shock others when you’re in your natural state.