Good on the Naked Rambler reposted verbatim from ‘The Guardian’.

Stephen Gough is back in jail. Embracing his activism might just do wonders for our society’s unhealthy attitude to flesh 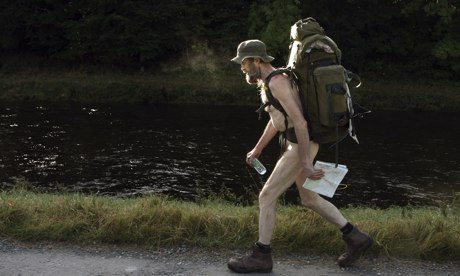 Stephen Gough. ‘Why is it OK to hint at highly sexualised nudity all day long and then persecute a normal man for getting naked.’ Photograph: David Cheskin/PA

You’d think that a fortnight of gale force winds would have us all hunkering down in jumpers, tucking our thermal vests into our jeans and flagrantly disregarding our partners’ hostility to bedsocks. Most people might be layering up in order to maintain bodily warmth – but not the Naked Rambler.

On Monday, Stephen Gough was jailed for 16 months after he breached an asbo intended to make him cover up in public. Gough is a prominent public nudity activist and has walked the length of Britain unclothed on two occasions; his most recent trip was the subject of a BBC documentary. He has also been sentenced and imprisoned numerous times on public nudity charges.

Gough maintains that being nude in public allows him a sense of personal freedom. The British legal system maintains that Gough’s nudity is not for mass consumption. But why, in 2014, is so much money being spent on keeping his body out of sight? His court records state there is nothing disorderly about his behaviour – it’s just about, as his lawyer pointed out in the autumn, “people’s reaction” to that behaviour.

We’re continually being exposed to sexualised nudity, but it’s rare to see a middle-aged man naked in public. During the day, before the watershed, we see hundreds of advertisements for gorgeous, semi-nude women moaning in ecstasy because they are enjoying their yoghurt or shampoo. Go and stand in any gym, cafe or shop with a TV on, and count the seconds until you see cleavage. For more than 40 years, the Sun newspaper has been publishing pictures of nipples that readers can gaze at over breakfast. Why is it OK to hint at highly sexualised nudity all day long and then persecute a normal man for getting naked as he goes about his business?

Gough’s critics are concerned that his presence could make vulnerable people feel disturbed and threatened. There’s nothing disturbing about nudity itself, just the meaning that people ascribe to it. Yet when nudity isn’t being used as sexual semaphore, it’s presented as something grotesque, to frighten the observer and make the subject a symbol of ridicule. Shows such as Embarrassing Bodies and The Man With the 10 Stone Testicles have fetishised freakishness in a way that stops us recognising real bodies. I suspect that the many men and women of all ages who experience body dysmorphic disorders are not helped by this. We may be regularly exposed to representations of naked flesh but we only ever see gods and monsters.

Initially, I thought that the laws “protecting” us from Gough’s body had a wider purpose. After all, if he’s allowed to get naked, we might all start doing it, and no one wants that. But the more I think about it, the more I am convinced that the widespread adoption of naturism might solve our problem with nudity. If we stopped seeing our bodies as either a source of shame, or something to show off, we might become healthier, happier human beings. Public nudity could prove revolutionary.

Young women would grow so accustomed to seeing real bellies and bottoms that they would feel less inclined to lose weight in order to match up to imaginary images, or get industrial filler injected into their buttocks. Violent sexual crimes might become more clear cut and easier to prosecute: you couldn’t make a big deal of a victim wearing a short skirt if no one was wearing any clothes at all. And there would be no need for Embarrassing Bodies, because we’d tackle our health issues frankly and fast, knowing there’s nothing to be ashamed about.

Gough has not chosen to go nude in order to invite us to comment on his body. He is reminding us that we are all naked under our clothes, and that no individual’s body should warrant particularly close inspection – but our collective attitude to nudity certainly does.

One thought on “Good on the Naked Rambler – more public nudity would be a good thing | Daisy Buchanan | Comment is free | theguardian.com”