Naturism is a way of life in harmony with nature. It’s characterised by common nudity, which has as goal the improvement of self-respect, respect for others and reverence for nature and the environment.

This is the modern Dutch definition of naturism. Naturism in the Netherlands; when did it start? Naturism and nudism is not something of the last decade. In fact, in the Netherlands it started around the 1930s. This followed the early naturist movement in Germany which apparently is the foundation of modern naturism and nudism to date. People started this movement as a reaction to the ongoing industrialisation of the world, where the human body was ignored more and more. The first group in the Netherlands called itself “the society of light-friends”, where light should be read as nude. At first groups like this one simply enjoyed their freedom in nature, which in those days was quite a shock to the innocent passer-by. Later the naturists separated themselves from others, entertaining themselves in secluded areas as happens a lot these days. 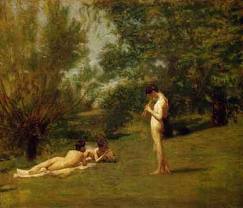 The second world war made naturism fade away. The “society of light-friends” fell apart. However, immediately after the war a new society was founded, called Sun and Light. This group acquired two pieces of property that were turned into naturist areas in 1949. This group was so fixed on being a healthy part of nature that they didn’t allow people who used tobacco, alcohol, drugs, or who ate meat. As a reaction to this, new “lightsocieties” emerged that didn’t have such strict rules. In the early 1970s Sun and Light dropped these regulations to stay in tune with the modern views.

Many naturist groups popped up everywhere until in 1961 they all united in the Dutch Federation of Naturists (NFN). This federation now has over 70,000 members and is still growing. Naturism is becoming more popular still; at least one in ten Dutch people have visited a nude beach or naturist resort once or more.

The history of Dutch Naturism is still being written.

One thought on “Naturism in the Netherlands”