I ve been trying to find out why people wear night-clothes. Pajamas. Nightgowns. Nightshirts.

I did some research and found that the “pajama” was copied from the clothing of Indian Maharajas and Rajas. They didn’t wear them to bed. Instead their pajamas were “recorded as the “uniform” of both the Indian gentry and peasants, also transcended sex, being worn by both men and women.” (According to an article on Dolce & Gabana.)

Pajamas were brought over to Europe by the English, who seemed to think it looked neat. The word pajama comes from the Hindi “pae jama” or “pai jama,” meaning leg clothing, and its usage dates back to the Ottoman Empire. (Source.)

Before the pajama, there were ‘nightshirts’ or nightgowns. According to Wikipedia, these were in fashion since around 1530. Before that time, it was apparently commonplace to sleep naked.

Now, with the lack of heating and a handful of cold winters I can imagine that people do their best to stay warm, but then fashion hits (even back then) and these things get turned into wannahaves and even fashion statements.

In our time, with most people not suffering from cold in winter (unless they want to), there is no reason for those floppy bits of fabric around your body. As we all know, sleeping in the nude is much healthier.

Whoever started using pajamas (which were day clothes!) in bed is still a puzzle to me, and I think to anyone who’s investigating that. It probably had its use back then, but today… it’s so unnecessary.

Stay naked, everyone. Also in bed.

(Note: the narrator isn’t always too kind in his comments.)

Dan Farson – Out of Step

A video about naturism from 1957

Adam, Eve, ancient Egypt, the Greeks and Romans. They all were familiar with the naked body. Social nudism and naked recreation were widely spread under pharao Achnaton (1351-1333 BCE). Participants to the classic Olympic Games (776 BCE) were naked to honour the human body.

Through Alexander the Great nudism spread from the Indian subcontinent to Europe as a religious or philosophical statement, around the fourth century BCE.

Only with the arrival of the Jewish, Christian and Islamic religions the culture of shame came into view. Those movements are basically responsible for the downfall of social nudity. 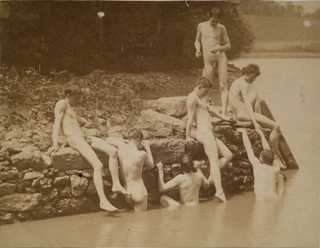 Naturism is a way of life in harmony with nature. It’s characterised by common nudity, which has as goal the improvement of self-respect, respect for others and reverence for nature and the environment.

This is the modern Dutch definition of naturism. Naturism in the Netherlands; when did it start? Naturism and nudism is not something of the last decade. In fact, in the Netherlands it started around the 1930s. This followed the early naturist movement in Germany which apparently is the foundation of modern naturism and nudism to date. END_OF_DOCUMENT_TOKEN_TO_BE_REPLACED

Reporters visit a naturist resort and interview the people present. Central question is: what is naturism and how is it experienced. About the ruling culture of being ashamed, and the relation between naturism and eroticism.