Things you can do naked.

Every serious nudist/naturist knows there are lots of things you can do naked. Not everything is ‘acceptable’ in our narrow-minded society, because simply walking down the street in the nude isn’t exactly something you see everywhere. Odd, because it’s one of the simplest things you can do in the nude.

It’s probably not the first thing you’d consider but it’s done. And done often. Just give your favourite search engine a swing with ‘naked skydiving’ and you might be surprised about the number of hits.

Of course you can wonder why people do this anyway, regardless of their state of dress. Most people assume there is nothing wrong with the airplane so why would one jump from it?

I can state that this is true. While I never had the opportunity to do this in the nude (alas, unfortunate, sad), I’ve done 2 tandem jumps and the thrill is beyond explanation.

A tandem jump is where you don’t learn actual skydiving but you’re hooked up to an experienced skydiver who does the real work. You do learn how to behave in the sky so the descent is safe.

Something to consider is that it’s cold. You start the jump from quite high and no matter how hot the weather is, it will be cold or at least chilly. I’d love to experience that, though. The rush of being so free, ‘floating’ in the air without any ropes attached, and seeing others fly around like that is amazing.

The need for speed?

Granted, you ‘float’ downwards at an insane speed. When you do a normal, controlled jump, you’ll go down with speeds around 180 km per hour (112 mph). I think that’s fast enough for a naked person. Trained skydivers who perform a ‘speed dive’ (limiting the air resistance as much as possible) can reach up to 320 km/hour (almost 200 mph).

Do you remember Felix Baumgartner? 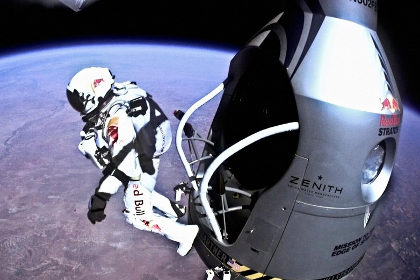 In 2012 made the highest and fastest recorded skydive ever. He started at 39 km (24 miles) and during his drop he reached a speed of 1342 kph (834 mph). Hardly the location and speed to do naked, but I thought I’d let you know about this anyway. It might give you a challenge. 😀

Some people take on nude skydiving for a challenge. Here’s a video of a young man named James Young who accepted such a challenge to raise money for a good cause:

Would you do it?

2 thoughts on “Things you can do naked. Skydiving.”