Simply being naked is not about sex.

I know, everyone who visits my site regularly is entirely aware of that. Nudity and sex aren’t the same thing. Nudity is the absence of clothes because the naked person does not want to have clothes on. This concept seems to become more and more incomprehensible lately. Our modern society seems to slip back in time for some reason. Nakedness is bad. Drone thinking is promoted to keep people under control and going in the way that some big power points out.

Free thinking out of the clothes. 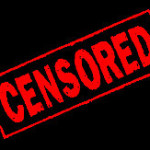 Yes, it’s a beaten to death statement but it’s real and true. The global naturist society has to make a stand, one stand, to the outside world. Double standards, hidden (lewd) agendas from one or the other will break our credibility, and that’s already a difficult item to get across.

Yes, it’s something that worries me and occasionally almost gives me a headache, like it does to the lady on the right. She clearly was a nudist long ago and foresaw the troubles I’m writing about here and now.

Why does it have to be so difficult to just be the way we want to be? I’ve said it before and will say it again: the world’s a mad house when people are more frightened of a naked person than of someone who’s armed to the teeth. Violence, murder, war, all kinds of misery are laughed at when they show on television, but the sky falls down when there’s a female nipple on the screen for a second. And a completely naked person? Nearly incredible.

You tell me if you have the answer…