You have probably come across this kind of picture: low camera stand-point, ‘model’ sitting straight for the camera, legs spread, full frontal view of the genitals and, oh, right, the rest of the model is there too.

Seen it? Yes? I thought so. No? Where have you lived all these years, or are you browsing the web using Lynx?

This is almost the kind of picture I am referring to. Sorry people who are hoping for a full frontal shot of my penis, it’s not in the cards for you today.

There is not always a need (if at all) to show ‘the goods’ just to prove you’re entirely naked. As in the image up there. If people want to kid themselves into thinking I was secretly wearing boxer shorts (urgh!) and I carefully hid them, so be it. They are not the audience I have my blog for anyway.

Right. This is my take on things. What is yours? Do you think that the emphasis on genitals, even when it’s perhaps not intentional, is necessary to show nudity?

Simply selecting a different position of the camera will already do a great job on taking the emphasis to the entire body, not just the genital area.

As usual I am curious about your ideas, experiences and visions.

Have a great, nude day, everyone!

Some tips on how to protect your pictures.

There are ways to make your pictures less interesting for collectors, harvesters, call them what you want.

People who are looking for pictures for their personal, lewd entertainment usually want big images. Full screen, high resolution shots. By resizing your images to something a lot smaller that is a step towards making them unappealing.

On my android phone I use an app called ImageShrink. The free version is great and does a great job. There is a similar app on the itunes store called image size. Resize your image to 480 x 320 pixels and your pictures are already a lot less interesting. For example, this picture: 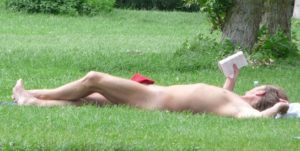 is 300 pixels wide and 150 pixels high. Nothing wrong with it, you can see what’s happening – a man reading a book in a park – but hardly anyone would want to steal this for its quality.

Yes, it is ugly but it is the ultimate way to make your pictures unappealing for poachers.

This picture is 480 pixels high and has text on it. Not pretty. Not exciting. But a lot safer from harvesters.

If you use Google to search “image resize program free” then you’ll find plenty of software to easily resize your images, even online ones. Note that online ones might not be the best choice because you can’t tell what happens with the pictures you upload to a site. The service might be wonderful but remember that the original might not be deleted until the owner of the site had ‘a look’ at it. Just something to be aware of.

The advantage of that also is that more and more people are on mobile devices. Small images download faster so they will love you for being kind on their data plan!

You can also see I added some filtering to the above image. It makes it more interesting (for me) but it also makes me a bit less recognisable. Play with filters a bit. E.g. snapseed on Android gives you a wide choice of those. I am certain Apple has something like that too, and you can find software for your PC for that as well. Just use your Google skills.

You’ve probably seen them. After all, they’re up every Sunday. I try to post nudist images of normal nudist/naturist people. Not the glamour stuff that’s been photoshopped to death and beyond, not the pretty people that will never represent mainstream naturists. (They probably wouldn’t want to be found naked among us anyway, so nothing’s lost there.)

For the real naturists I’ll keep posting the Sunday Noon Nudists. Be happy. Be naked. Be proud of your body; it shows who you are instead of who you pretend to be when you dress up.

Original article to be found at the aanaturist-blog.

Imagine if you will that this blog wasn’t about naturism, but about camping and backpacking.  In my theoretical camping blog I’d write about my travels, offer advice, discuss issues within the camping/backpacking community, and show you pictures of my trips.   No one would get upset about pictures of Yosemite or the Grand Canyon.  But in reality my blog isn’t about camping, but nude recreation and the naturist lifestyle.

The nude human body is the core of our lifestyle, it’s what defines our philosophy and our outlook.  And when discussing our way of living, how can we describe it?  Sure I can drone on forever about nude recreation in words and sentences.  However, nothing describes who we are or what we believe than a picture. Many of my readers recall that my own foray into naturism began by seeing images of non-sexual nudity.  Naturist photos act like ambassadors to non-naturists, demonstrating what nude recreation is like.

Nude photos also fosters body acceptance.  I used to hate how my body looked.  I thought I wasn’t the “ideal” body, or a body fit to be a naturist.  But seeing many different people nude has changed my outlook.  I have finally learned to accept myself, and accept others.

Now I’m not naïve, I know that our lifestyle attracts the wrong people.  It’s a sad fact.  Our photos can be exploited by some really sick and warped minds.  Case in point: naturist photos used to show pictures of entire families, but now because of a few perverts, no naturist in their right minds would allow photos of their children to be posted online.  Another sad fact is that the term “naturism” has been hijacked by the porn industry.  But this isn’t the fault of naturism or nude recreation.  Blaming naturists for having their photos exploited is like blaming a woman for being sexually assaulted because she was wearing a risqué dress.  The accountability should be placed on the victimizer and not the victim.  I’m not going to stop being a naturist because of a few losers.

Nude photos are a part of naturism.  Nudity is part of the naturist experience, but the biggest part of the naturist lifestyle is what takes place between the ears and not the legs.  Nude photos serve only as an example of  what naturist activities are.  There is nothing shameful about the naked human body.  The only “shameful” part of nudity is those who exploit it for the wrong reasons.

Selfies? What are selfies? Selfies are pictures you take of yourself, usually with a small camera like the one in a smartphone. Many people engage in that “sport”, so you can find examples of them everywhere. Try Google-ing selfies.

There is nothing wrong with taking a picture of yourself. Since everyone does it, nudists/naturists do it too. There is a trick to doing it right though, especially if you do it more often.

Many people forget to make the picture slightly interesting. They just stand there, at best try a smile, and that’s it. Later they might find that there is a reflection in a mirror they entirely overlooked, or something else that destroys the image:

It pays off to make sure, and it costs nothing.

Another thing that’s worth considering is “don’t just stand there”. Try to get the environment in the picture if that’s what you’re there for. If you want to have a shot of you because it’s you, it might benefit the picture to do something, hold something in your hand, or look at something (which preferably is also in the picture).

Now I don’t claim to be an expert, but I like to look at nice pictures. Maybe this little post on DIY pictures encourages you to look at the pictures you take a little differently.

A webpage with some good tips is here. It might be a strange place to go to (it’s one for dating tips) but the tips on taking selfies there are really good.