We all know it, know that we need it and most of us aren’t too impressed with it. But… it needs to be done. (I think it was John Wayne who first used that but I’m not sure.) 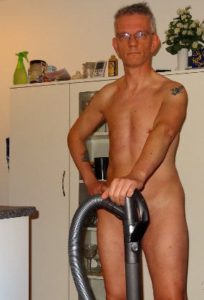 Do you do household chores? If so, do you do them naked? I do, as much as I can. Since I live on the top floor (5th for Americans, 4th for others) of a building, I have the liberty of being naked as often as I like. (And what’s not to like about it when the temperature’s right, right?)

The odd thing I’ve found is that some householdly things are much easier nude. The things where you have to bend down for, kneel for, or squat. Being naked means there is no fabric holding you back. No fabric is pressing up or down onto your genitals or other parts of your body that would otherwise get the stress.

And let’s be honest: doing things naked is just much more fun. More relaxing. Easier. Why drink vinegar when you can have orange juice, or tea, or coffee? 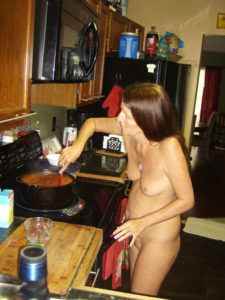 Cooking is also something you can easily do in the buff. It’s a matter of being sensible if you use hot butter, grease or other ingredients that can surprise you by jumping out of the pan to hit your skin.

Aprons have been invented for a reason, folks. Cooking nude is fun but being clever about it is just common sense. That is something most textiles seem to switch off whenever you speak with them about being nude around the house. For some reason many of them seem to think that you have to do everything in the nude. I have rules for that. If it’s not necessary to put something on: leave it off. In the few other cases: put something on. As to where the boundaries are for that is up to each of us personally. I for one don’t like boiling water splashing onto my skin but there are lovers of anything out there. 😉

Another example of a great nude activity. I don’t have a garden but I enjoy the images and accounts of the yearly World Naked Gardening Day.

What is your preferred nude activity? I listed only a few, I’m sure there are many more!