Yes. It had to happen as it’s a topic of discussion wherever I seem to look lately. There are Christians against and in favour of naturism. Muslims in favour of and against naturism. I’m not going to delve into the pros and cons that every available religion has on naturism because that would be a waste of time. Only a few of them have no problem with it, I’m sure.

So why can’t you be naked and religious?

First off: I am not religious. I’m spiritual, which is something else.

I’d be in their league if I had to choose something. Luckily I don’t have to. On to some of the things I don’t get about nudity and religion.

Although the world’s standards may permit or even encourage nudity, the Bible has a different perspective. It is true that the first humans were created unclothed by God (Genesis 2:25). Adam and Eve were innocent in their nakedness, but after the fall everything changed.

So basically nudity was fine. Their god, and that of many others, created the people in his image. Initially they were nude. Gives reason to think.

Of course this is all metaphorical (except for those who take the bible literally) but still there is strife between pro and con nudity Christians.

This is a bit problematic when several schools in one religion don’t agree on what’s what.

I think everyone should be free to decide whether or not to dress. Regardless of religion.  However I also think everyone should not interfere with people who think differently. If you want to wear long, black clothes in the heat of summer, by all means, but don’t push your opinion of “how it has to be” on others. Your religion, your beliefs, your way. Not others, not mine. I know Christians who are against nudity. I know Christians who are fine with it. Bottom line: be happy being a Christian and don’t bug each other. 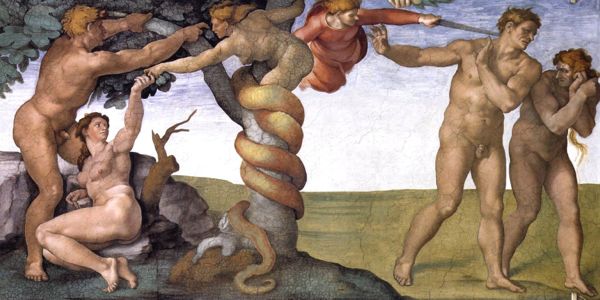 Same thing in Islam. There are lots of nudists in countries like e.g. Egypt. They’re forbidden to be naked outside. They meet up in the dark, in apartments, so they can spend some nude time together. Why can’t other Muslims just let them be?

Honestly folks, if nudity is such a big deal in the eyes of your gods, then your gods should prove their allmightiness by changing peoples minds. Not letting you, the people, fight this out.

Note that this is not every naturist’s view. It’s mine. Just so you know. I’m also not digging deeper in other religions. Feel free to do so if you want to know more.

3 thoughts on “A naturist’s view on religion”